Man to Man Offense with ABCD

Summary: When younger players are learning the game, they often struggle with what to do when they don’t have the ball. There is so much they could do, they freeze and do nothing. This offense, creatively titled ABCD, simplifies that process and can be adjusted as needed to fit the skill level of your team and any dynamic talents you may have. It can also be adjusted to teams that play 3 out, 4 out or 5 out offenses. This offense works best against a man to man defense but can be used versus zone.

Why should you use this offense?

What are some challenges when implementing this offense?

Much like a the game of Texas Hold ‘Em, this offense takes minutes to learn and a long time to perfect. Players must get very good at one thing at a time, not only their expected actions but the counters they must learn as defenses adjust. As a coach you must install this offense using small sided games so that players understand their role and can easily see how what they do affects their teammates as well as the defense. As it builds you can expand or change player roles as you see fit for your team. What seems like a rigid offense at first actually gives players freedom as they learn more.

Instead of the traditional player roles, each of the players is designated with a letter that reminds them of their role. As players get the hang of their role, it may expand and you can designate a player to more than one letter. You can also adjust this based on the defense you are playing against. You can make kids ‘Option’ players if you think they can consistently make good decisions on what to do after they pass. There is no limit, minimum or set combination of these letters that you need to have on the floor at once, which is the beauty of it. Everyone simply needs to take care of their role.

This offense works well if players know what they are expected to do and do it as well as they can. It does not take a superstar set of players to run this smoothly. Remember this quote from Celtics Coach Brad Stevens: “Find your strength and let your strength shine.”  Which is a nice way of saying, put kids in a position to help their team the most. Encourage kids to be the best screener or cutter on the team. Not everyone can be the best player, but everyone can be the best at their role. To simplify it even more, the Bill Belichick phrase, “Do Your Job.” applies to this offense as much as any other.

This offense does not have a set pattern of play, but can be run out of any formation you prefer. The diagrams are all based on a five out offensive set, but as a coach it is your job to pick out the formation that best suits your team. Nothing changes with the formation. The following are some common starting points for the offense where you can see the benefits of players completing a specific role. Many of them may simply end up looking like quick hitters that you could also use if you prefer to. Each of the following diagrams shows an offensive set initiated by a player with a different designation.

Your point guard usually will initiate the offense to a wing instead of the top of the key. In this case our point guard is designated as a D, so a simple dribble handoff occurs between him and 4 who has filled the spot at the top of the key. Depending on 4’s skills, and the defensive alignment he can pop or roll as with any other ball screen situation. Note the importance of spacing as 5 and 3 are spread high and wide giving the point guard plenty of room to attack and make decisions. NO MATTER WHAT A PLAYER’S DESIGNATED AS, WE ENCOURAGE THEM TO CATCH AND SHOOT IF THEY ARE IN RANGE AND OPEN. Attacking off the dribble is the second option and passing is the third. 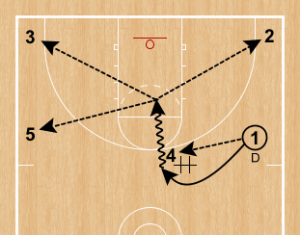 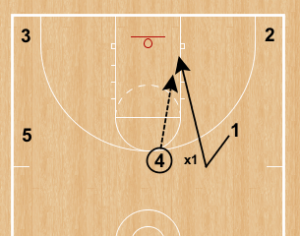 Any player you designate as a D, has the option to backdoor cut if they are being overplayed. Once defense catch onto the action, if your team is to be successful, you must learn what to look for and how to counter. Our team loved doing a 1 v. 1 breakdown drill, where all they had to do was pass to a coach and read how their defender was playing them. Then we would add in players gradually until he hit 5 v. 5.

The C designation is where I would start most youth players. Once their skill and size changes, you can branch off and add new things. This is the most basic part of the offense and is nothing special.
As a coach you must emphasize though that you are not only cutting hard for yourself to score, you are leaving an opportunity for the person behind you to score as well. In this case, 4’s cut might be defended but 5 has been freed up to score. Young players will frequently jog this cut if they don’t get a layup early in a game. Emphasize that you are cutting for the TEAM to score, not for yourself to score necessarily. 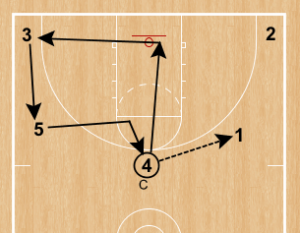 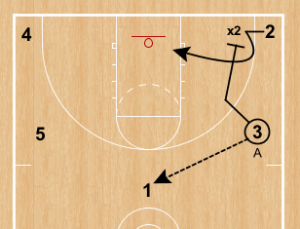 Your best shooters should initially be labeled as A. Their job is to screen away after they pass. This usually keeps them freed up around the perimeter to get shots off. This DOES NOT mean they only take jumpers. You must emphasize as a coach that the better screen they set the more open they will be after the fact. The easier the baskets we will score. In this case 3 passes and sets a simple pin down screen for 2. This is easy to replicate with small sided games or breakdown drills so players get the hang of how to read a defense and when to curl or pop. 2 must do one of those based on how the defense is playing. This is a common action in many offenses, so teaching it to players when they are young, and simplifying the decision making process makes these skills transferable as they move up to other teams later on in their career.

You may only want to designate one person as your ball screener, or you may not want to ball screen at all, but more than one clogs this offense a bit. Either way, every time the 5 touches the ball, he follows a pass with a screen. He can slip the screen as needed. He also has to learn when is the right time to pop and when is the right time to roll based on his skill set and the way the defense is aligned. A general rule of thumb is that if he beats his man to the screen, slipping to the rim is a must. The more tightly he is defended, the bigger and better he must screen. 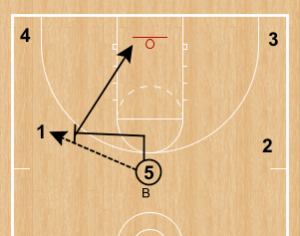 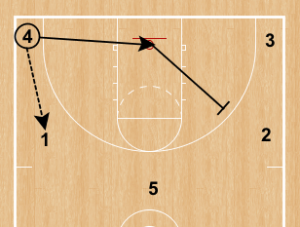 Here is an awkward situation that sometimes occurs for a young player. His job is to pass and then set a screen away, but ‘away’ is technically the sideline. This is not a problem. He can simply cut hard to the rim and maybe get a layup and then finish that cut with a screen for anyone without the ball.The worst case scenario is that he has created a great opportunity for a baseline drive by 1 without help defense in good position.

Solid offenses move the ball quickly with the pass or the dribble. In this case, having the ball passed twice quickly could work in our favor but could cause confusion when players are just learning the offense. As the ball is thrown to the corner two screens away happen and 5 has his choice of how to use them, but there is a good likelihood of an open post up chance. 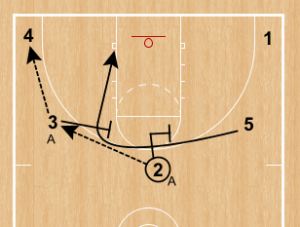 To learn more about how to use a screen, take a look at this video link:
https://www.youtube.com/watch?v=z9dQB37N5GE

To learn how to move effectively without the ball, take a look at this video link featuring Richard Hamilton, one of the best players ever at moving without the ball:
https://www.youtube.com/watch?v=2MN2QlaIB24

Closing thoughts from Coach Ben Murphy: I like this offense for its simplicity. It allows players, even those with limited skill, to have a job they feel like they can accomplish. As a coach, it is very easy to see if a player is not doing their job. As a teacher, I love it because it can be adjusted as much as each coach sees fit for his or her own team.