Summary: Motion offenses come in many forms, but in the truest form of motion offense, there are no predetermined movements from any player. They learn with some limited structure with guidelines rather than hard and fast rules. They also help teach some basic ‘off the ball’ movements that players can learn and take with them into any other offense or team they are a part of.

Coaches Quote: Brad Stevens recently said that he thinks there really aren’t five positions any more, there are basically three: ball handlers, wings and bigs. If you look at the professional level, that is what you will see. More and more you will also see bigs with the ability to perform any of the required actions necessary in a motion offense. It does not matter a players size. It matters that they learn a few basic skills and develop them to a superior level.

Ball Handler: No matter what formation you play, whether it is 3, 4 or 5 out, you are going to need a primary ball handler to get you into your offense. It’s never a bad thing to have more than one of these, but it is important that your players know who is initiating the offense. Your point guard must also understand their role within the offense may change based on their skill development as well as the opponent.

Wings: Depending on your formation you may have 2, 3 or even 4 wing players on the court at a time. At the youth level, anyone who is not your primary ball handler is likely to be designated as a wing. This would help in skill development that they learn all the basics to make the offense flow.

Bigs:  I would hesitate to make anyone designated as a big or a post player. Put them on the wing and let them develop skills. If they happen to grow into being a big man at the next level, then you’ve given the high school coach the gift of a talented big.

For the purposes of the diagram, let’s use a 3 out set up. You can use whatever set up is best for your team. If you have one good post player, move to four out spacing. If you have a team full of guards, play 5 out. That is your decision as a coach.

To start the offense, your point guard needs to commit to a side. That helps the other four players determine what they may do next. If the point guard stays neutral or simply fails to get the offense started the stagnation causes problems. As you can see, the point guards here has started the offense to the right. As with any offense, if he can make a play and score on his man he has the freedom to try and do that. But your most common start to the offense will be a wing entry pass. 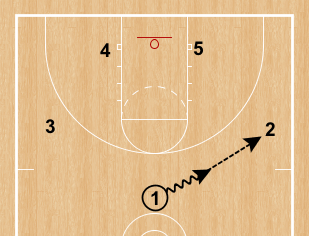 Any time a perimeter player catches the ball, they should be thinking if they can score or not with this touch. Can they catch and shoot? Can they drive past a defender who is closing out too hard? Secondarily, if they are shut down, how can they create an opportunity for a teammate. The better they get at making these decisions quickly, the better off your offense should be. Notice how the perimeter spacing here hasn’t really changed so much as it has shifted. No matter what formation you are playing, spacing has to be perfect to make the offense work. 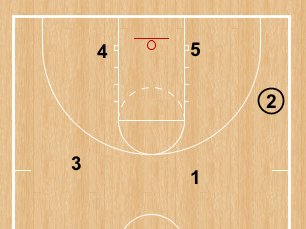 After the pass is when the nature of the motion offense shows up. The point guard has many options. If their defender is playing tight they can rim cut. If there is space in either corner they can cut to it. They can free up the weak side wing player with a screen, or they can set a ball screen.

This decision has to be made quickly, so how do we go about making it? Well as a coach, you have to consider the strengths of your point guard. Can they score in traffic in the lane? Are they good around the perimeter? How well do they screen? Then after you have figured out the strengths and weaknesses of the player, you can give them a few options to chose that are more likely for them to have success with.

Eventually players will learn what they are best at and what the defense is giving to them. This is why great motion teams are hard to scout because they don’t do the same thing every time.

The only thing they can’t do after a pass is stand. As the great West Virginia Head Coach Bob Huggins likes to say, “If you pass and stand, then you pass and sit (on the bench).” 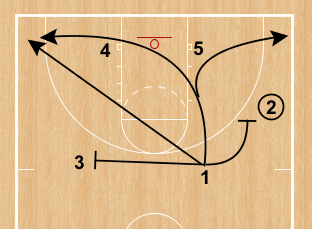 This decision making process would happen every time a player makes a pass, and it should be immediate. At first it will not be, especially at the youth levels. That decision has fallen on 2 now when he passes to 3. He really has four options he can choose: cutting to space either to the left or right corner, or he can down screen for 5, as well as follow the pass with a ball screen. Note: As a youth coach, to simplify, you may simply give your players two options, but I would never simplify it to the point where they don’t have freedom to choose. The whole point of a motion offense is to give them a choice about what they should do. If your players aren’t making good decisions, that is what practice is for. 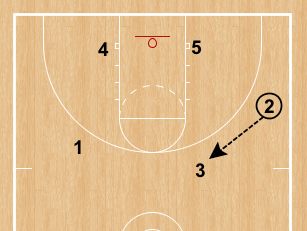 Even after 2 has cut, the decision making does not stop. If he cuts baseline and his defender beats him to the spot he is going, he has the option to use a screen and go right back where he came from. The point is, he has options. 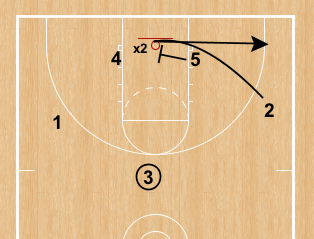 No matter what formation you start in, there will opportunities to throw to the post. When a player throws to the post they have created a beautiful little two man game that can be perfected with lots of 2 v. 2 in practice. The 2 can fade to the corner, cut through the lane looking for a give and go, or even screen away and involve the guard at the top of the key. It all depends on what the defense is giving you and which players that you, as a coach would like to get the most shots for. 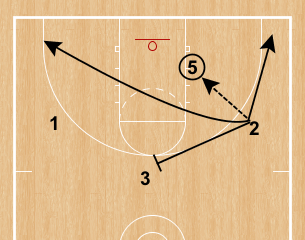 Each catch and pass is like a series of ‘if-then’ situations. In the diagram, 2 has four options shown and each one of them could be the ‘right’ thing to do based on how his defender plays. If the defender sags and double teams the post, he can simply float to the corner for three if that is within his range, or if the defender turns his back, 2 can simply make a rim cut. If player 3 has a match up we could exploit, screening for them is not a bad idea either.

To learn more about Motion Offense, check out this offering from Coachtube.com. “The Power Motion Offense” by Shane Dreiling. https://coachtube.com/course/basketball/the-power-motion-offense/552248

While the learning curve on conceptual motion offenses is a steep one, you will eventually produce players that know how to make good decisions within the flow of a game. This offense gets better from the beginning of the year to the end and by playoff time you could a have team that makes good decisions and is hard to scout.