Summary: No matter what level you play or coach at, you are going to see teams that play almost exclusively zone. Your zone offense does not have to be complicated to be effective. The most effective two concepts in attacking any zone are overloading a side and using quick ball movement. The following zone offense uses these very basic guidelines to get open shots for your shooters and good post up looks for your bigs.  The basics of this offense are diagrammed against an even front zone, but with one or two minor changes you can beat an odd front zone as well.

When athletes are learning this offense they are likely going to want answers to “if-then” questions. If I catch the ball here, then where does it go?  And the answer every time is: it depends. Teaching decision making in this offense is key. I would only spend a few minutes getting the basics down 5 v. 0. Break down into small sided games and then build to 5 v. 5. Two quick straight passes usually results in a big advantage for the offense.

Point Guard: All guards should try to get or stay in a position where if they catch, they can force two defenders to guard them. Creating because if they draw two, that means someone is open. The better they are about deciding when to shoot or when to drive, the more they are going to break down the defense and force it to make mistakes. Above all, in this offense the point guard cannot be dribble happy. The ball moves the zone. Passing beats a zone. If he is going to dribble it needs to be with a purpose: either to score or create a scoring chance for a teammate. Attacking 1 v. 1 here is not needed.

Right Wing: Assuming that you are going to start your offense to the right hand side more often than not, this wing should be your second best shooter. He is going to get opportunities to shoot and attack, but he cannot be selfish. His best chances will come upon a ball reversal.

Left Wing: At least to start your left wing player should be your best shooter. Their first touch is going to be after a ball reversal and they are likely to be open. If they aren’t they are going to have an open pass to one of the two players in the post positions.

High Post: We use the term bigs loosely in this one. Really you have one person always at the high post and one person as a baseline slider. They can and will exchange throughout. The player who starts in the high post simply needs to keep moving and showing to the ball every time it is moved. They shouldn’t work any lower than mid post. They don’t need to be a great player they should be one of your bigger players and hopefully they are able to make contested layups routinely.

Baseline: The baseline slider and the the high post exchange from time to time, but this person’s basic function is to keep their butt to the baseline and keep the defense from being totally focused on the ball. This is an awkward position to defend, which is why it’s effective.

Coaches Quote: “If the ball move the ball from one side of the court to the next three times, our shooting percentage rises to nearly 100%.” This was said by University of Manitoba Head Coach Kirby Schepp. Schepp has also worked with the Canadian National team and the same basic stats hold true at that level. 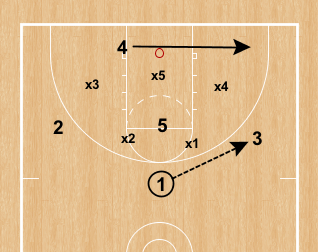 Most of the time your offense will start to the right hand side. Depending on how the defense plays you, you may already have a 2 v. 1 advantage that you are looking for. If they are playing you straight up, this should be what you are seeing. One of our basics is get the ball to this baseline runner whenever possible. Every touch, players should at least give this player a look. Every time he does get a touch, the high post should dive to the low post looking for a layup as shown here. It is VERY important to put a great player in that baseline slider spot. The more attention they can draw from the defense, the better. They don’t have to be a great shooter, but if they can step out and hit that corner three, the zone becomes almost impossible to guard. 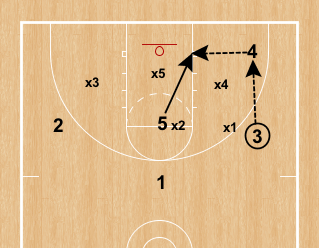 The more common look we get when we throw to the right to start the offense. The defense will shift onto the ball. The weakside top will take away the high post and the low wing will take away your baseline runner. The harder they commit to this, the more open the next option will be. 3 simply holds for a split second and lets that shift happen. In general, holding the ball against a zone is not a great thing, but you want to sucker the defense to fade away from a great shooter on the weakside. Once they have committed to ball side we simply throw two hard passes from side to top to side and your best shooter will have an open look. At worst, a closeout may stop the shot and he can attack a shifting defense with an advantage. We teach our wing players to think shot first on the ball reversal and attack second if the closeout takes the three point shot away. 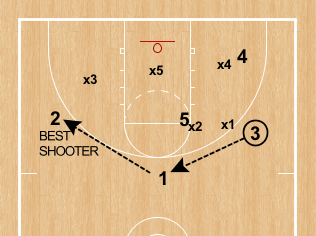 If defenses are playing a ‘bump’ 2-3 zone, x3 will actually be the first to cover this and he will drop back as soon as x2 recovers. In that time, if our 4 man can slide baseline he should be wide open. 5 could also be open in the mid post. 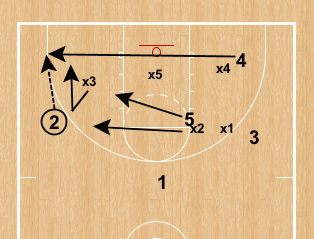 If we get the ball in the high post. He has two options and he must look at them in this order: Pass to the low baseline or kick opposite. The amount of times we get BOTH of those is astounding. If teams cannot keep the ball out of the high post, they cannot beat you with their zone defense. Post players need to look for each other first, and to the opposite side of the floor second. This will breakdown a defense. 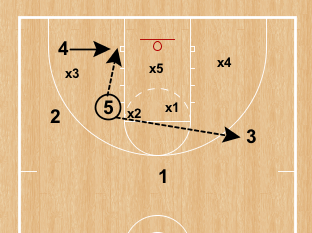 In one wrinkle in this offense, you can exchange the high and low posts. This is not needed nor should it be done if there is a large skill difference between the two players. But if they are both people who command the attention of the defense, they can exchange as shown here. 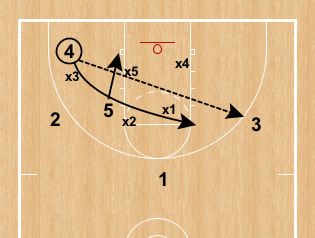 If you play against a 1-3-1 zone defense or any other odd front defense, the original alignment needs to be adjusted. If you stayed in the same formation, your offensive players are well covered by their defense. That being said, small adjustments and the the same basic principles of overloading a side and quickly moving the ball will work to your advantage. 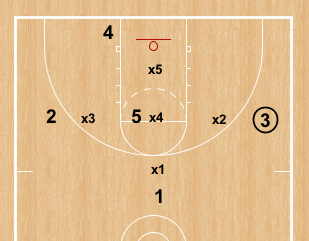 Against a 1-3-1 all you would do is pull your 5 man outside and split the top defender. Your shooters would stay in that second row, and your 4 man would still stay below the basket running the baseline.

With one simple pass to the wing, and a basic shift from this zone, you will see the same opportunities open up as before. 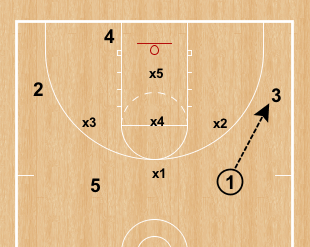 By overloading the right side and making two quick passes we should have a look in the paint from 5 diving to the rim, same as before. Or we could get a skip pass to the opposite wing. This pass should be open because typically the weakside wing is instructed to protect the post. 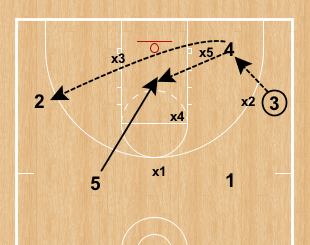 To learn more about attacking a zone defense see this offering from coachtube.com.

Offenses do not have to be complicated to work. Put your best players in the right positions and trust them to make simple and quick decisions. If they can do that, you are well on your way to beating any zone defense you see.