The goal of a 2-3 defense is to force outside shooting to beat you. So as you might notice in the following plays, we are trying to create an open look for one of our two best shooters, or even both. It is important you work with all your players, and especially your better shooters about their footwork going into the shot. They may be wide open, but they have likely ran into the open space and need proper footwork before shooting their shot.

Inbounder: The inbounder is usually one of the scoring options in these plays. Often times, they get overlooked once the ball is inbounded. This is a good place to put one of your better shooters, or depending on the set, one of your big men who can finish at the rim.

Shooter(s): To beat a zone you are going to need one or two players who can shoot from distance. Inbounds against a 2-3 is the easiest way to put the ball in the hands of the player you want, where you want it, when you want it.

Screeners: To make this work, you need to have a few players on your team that don’t mind doing the dirty work. Their entire function in these plays is simple. Most of the time it is simply to set a screen to allow the shooter an easy catch. The better the screen they set, the more open they will be for their own shot.

Players tend to overthink or over complicate things. Make sure to remind them of the following quote: “Two hard passes in a straight line beat a zone.” Each one of these inbounds play involve two quick passes that produces an open shot. Repeat this phrase until the understand how the simple concept can produce so many good results.

Play #1: BOXIn this play that we call Box, we put our best shooter as the inbounder, shown here as 1. It also works well if you have your two bigs start at the free throw line, and your guards start on the low post. It helps if your 5 is a half decent ball handler and has the strength to throw a skip pass accurately and on time. 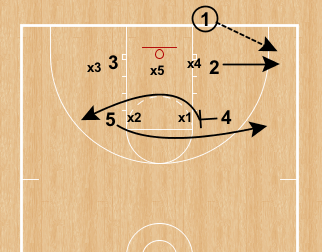 On the break, 2 steps to the corner for the inbound. 4 screens to highest ballside defender, x1 in this case. 3 steps towards the corner like they are looking for a pass, but really they are just getting to the outside shoulder of the bottom defender. Similarly, 4 stops their cut and screens the top defender on the zone. At this point we have sealed the weakside corner and the inbounder, our best shooter, cuts there and gets a skip pass from five. which should result in a wide open three.If it does not, often times we have an open post up after the flare screen from 3. 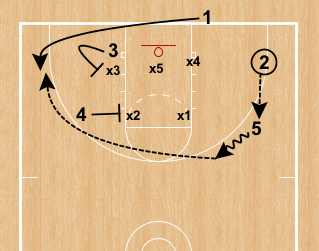 This might be the simplest inbounds play you can find, but it works. All we are trying to do is overload the baseline. You should line up your best two shooters on the foul line and your big men should be spaced wide. This is an odd set up, so that alone should get the defenses attention. On the break call, the two shooters must sprint to the corners hard enough to get the attention of the wing players. We are hoping they fade too far to the corner and leave the blocks open. 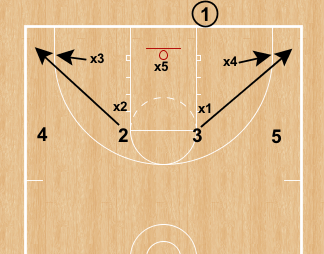 If the defense does not react to the shooters, they have to get the ball and let it fly. If the spread out to cover the shooters, one of the two bigs will be open because we have overloaded the baseline. You can probably only run this set once or twice a game because it is easy to see what is coming if you have run the play before. Pick and choose the time carefully that you want to use this. 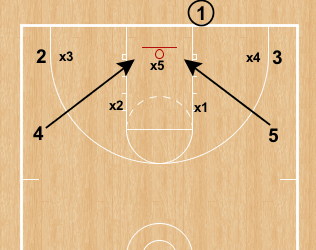 In this play we call option, we line up our best shooter with the middle defender. Our best post player starts out opposite the ball. On the break, the 4 sets a screen to the middle man. Many teams who play zone don’t anticipate this screening action. It is also especially helpful against teams who go to a 2-3 only against baseline out sets. 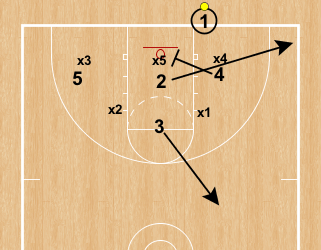 The 2 will flash to the corner and if he doesn’t get defended by x4, we get it to him and he shoots. 4 holds the screen as long as he can while 5 fights to the near side block for an easy layup.

3 simply fades to the top of the key as an easy outlet if we somehow don’t get either of those first two looks.

To learn more about baseline out of bounds against a zone or man to man, check out this offering from coachtube.com: ‘Best of Special Teams Playbook’ https://coachtube.com/course/basketball/best-of-special-teams-playbook/1619770

Baseline out of bounds put you in a position as a coach to help your team out as much as any other point in the game. Put your best players in a position to do damage to their opponents. It could be the difference between winning and losing.