Summary: One of the most popular new ways to teach the game of basketball is the Read and React offense. It was developed by Coach Rick Torbett and has been used and adapted by teams all over the United States at all levels. Many coaches like it because it teaches the basics of the game in layers, and there are no set plays, simply guidelines that govern the offense.

As a coach in the Read and React offense you have to let go of the reigns a little bit, but not completely. You simply need to be watching for kids making the right reads based off of the ball handler and what is happening around them. It is imperative that you stay on one layer until, as Geno Auriemma likes to say, “You do it until you can’t get it wrong.” The good thing is, even if you went into a game only knowing Layer 1, you could survive and possibly even thrive. The worst thing you can do is skip steps as a coach. The players will end up confused instead of confident. Take it slow. Go through the layers at a speed your players can handle.

The Read and React offense simplifies positions to only two. Players are either perimeter or post players. All players should know the roles of a perimeter player, as they are the foundation that makes the offense work. Secondly, the Read & React offense considers anyone who catches the ball in the post area as a post player, even though they may have simply been cutting through the lane. Post players have a series of movements that are unique to their position that can be built into the offense in later layers, and since anyone can be ‘in the post’ at any time, players should eventually learn those layers as well. In teaching the offense, however, most teams learn from a 5 out set up because it is simply easiest to learn from.

Layers of the Offense

The following diagrams will show 5 out formations because they are the easiest to diagram the layers of the Read and React, but again this offense can be run with three, four or five perimeter players depending on what your team has available. This is not meant to be an all inclusive look into the Read and React, rather a sample of the first few layers so that if you are interested in the offense, you can build off these four layers when your team is ready.

This foundational layer of the the offense teaches the most basic and probably one of the most under taught skills in the game of basketball: cutting without the ball. The basic rule is, once you pass, you make a rim cut and fill to the open space, usually in a corner, if all other players have moved correctly.  Once a player passes and makes a rim cut, the other players behind them simply fill in the space that was voided by the cutter. There are no reads to make here, and no options to do anything besides cut. 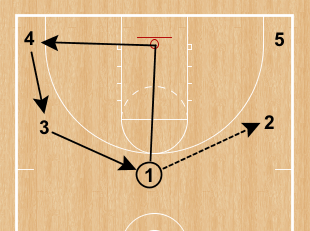 Another basic habit that coaches should teach at this layer is when to make a backdoor cut. Many teams who play man to man like to deny one pass away. In the Read and React offense, if your defender takes one step over the three point line, it is an automatic backdoor cut, with all other players moving and filling space accordingly. 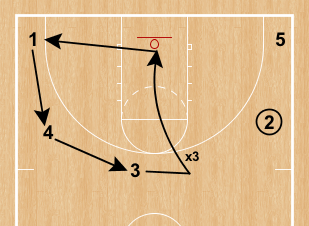 Lastly, when players are first learning this layer, they will likely do a few things subpar. First they may not cut immediately or cut hard enough to be open. That is a skill that must be drilled early or else the other layers on top of it will not work. Secondly players may not be great at filling the open space to begin with. Do not skip this step. It makes all things flow nicely if players start to get it right. Last, after a cut, players may fill out to a spot that was already occupied. If they make this ‘mistake’ they can simply call out this players name and back screen for them. Technically this is a whole other layer, however this situation comes up often as players are learning. 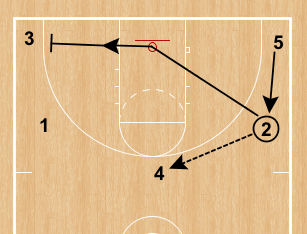 The rules for this layer are the same as the first layer, so players should be able to pick this up quickly once they have mastered the first layer. If the ball is thrown to the post, and remember anyone in the post area is considered a post player, they make the same cut to the rim as they did before, however this time they make what Torbett likes to call a ‘Laker Cut’. Players can either Laker Cut high or low depending on where the ball was caught in the post and also where the defense is playing. Again, don’t skip this part or speed through it until your players get the hang of making this cut. Many of them are not familiar with the terminology so that may take time to learn. 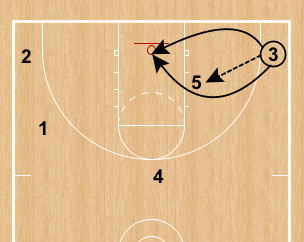 This layer begins to teach another set of actions. This time based on what the ballhandler does. Torbett does it in this order because the movement is the same, but what triggers the movement is different. In this layer, if one player dribbles directly at another player, they must back cut to the rim. All other players must fill spots behind them. Players who have not done this before might freeze, but once they get the hang of it, this could provide the offense with some easy scoring opportunities. 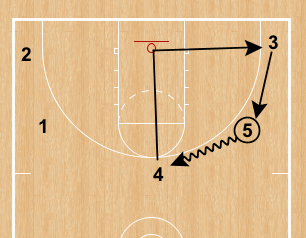 Much like any good offense, coaches want players dribble penetrate the defense if they can. In this layer of Read and React, players learn what to do when this happens. It is quite simple. When a player drives the ball to the hoop, every other player moves up one spot in the same direction as the ball. By doing this, the five players on the court have created space and are also working against the natural flow of help defense so they should be available for a drive and kick jump shot. 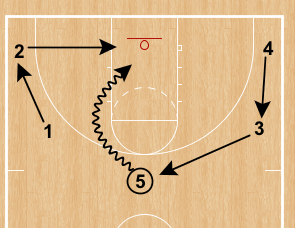 There are many more layers to this offense than what is presented here, however, you can see that even with just these four layers, you could create many scoring opportunities. If you are interested in this offense check out this offering from coachtube.com: The Read and React Offense by Better Basketball

This is a great offense to teach kids when they are young because it ingrains many good habits that players can use no matter where they play in the future. It is customizable to your team’s strengths and you can build onto it in layers you see fit as a coach.