Summary: Having a few baseline out of bounds plays that you are confident in as a coach is an essential. Depending on the time, score and overall game situation, your needs might be different. Each of the following plays is designed to give you both a look at an easy two points, or an open three.

Key Coaching Points: The following three plays are out of bounds sets that should be run against man to man defenses. I chose these three for a few reasons. First, I have run them with my team, with some success. Second, they are not the same few sets that many coaches tend to run. In practice, I think it’s important to put players into different postions so they learn all plays from more than one spot. The more roles they understand, the more valuable they are to your team. Everyone has their favorite few baseline out of bounds plays these are mine.

Coaches Quote: The goal of any out of bounds play should be an easy score. I heard Canadian basketball coach Kirby Schepp once say, “The team that makes the most right handed layups (or dunks) usually wins the game.” Every one of these three plays sets you up for that opportunity.

Statistics back it up: Baseline out of bounds plays could account for up to 10% of your offensive possessions in a game. Getting easy baskets out of them is absolutely critical to improve your team’s offensive performance.

This is a set that the Celtics have run for years, it gives players some decision making freedom to read the defense and adjust. Once your players know what to look for in how the defense is playing them, this play becomes even more difficult to defend.

Your point guard should be your inbounder. The assumption here is that he or she is a pretty good decision maker. Line up your 3-4-5 across the foul line. They don’t have to be in the order, but the best player of the three should start on the weakside elbow, as 3 does here. Your best shooter is camped out in the corner. Most of the time he is a decoy to simply free up spacing. But if you catch the defense sleeping, or sagging in to protect the rim as shown here, a hard two handed baseline pass to him could result in a quick three. You’ll probably only get this option once a game, even though this is a set you can run a number of times due to the options players have within it. 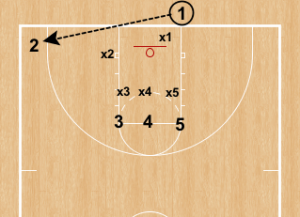 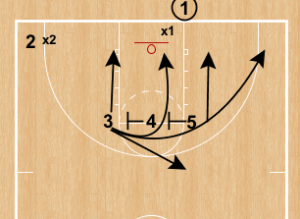 If the 2 is well defended, he simply stays out there and takes a defender with him. We are happy to open up the middle of the floor for a potential easy score. On the BREAK call, the 3 has several options. If his defender is, for some reason playing him too tightly, he can just break right to the rim. He can dive in between the two screeners if his defender overplays him to the ballside corner. If his defender trails he can run off both screens and curl for a layup or jump shot. If his defender sags off to protect the rim, we can change the angle of the screen and he can step back and hit a three over the top of his teammates 4 and 5.It is imperative that you put a player here who can read defenders positioning. They have a lot of options and freedom to choose here, but they must know what the defense is set up to take away so they can exploit it.

The ballside big continues to hold his screen and the middle man in the line uses it. We tell our middle man, 4 shown here, to go opposite of where the first player went. In this diagram, 3 has cleared to the corner and 4 should cut down the lane line. After 5 sets the screen he should dive to the weakside block. You would be surprised how many times this option is open because the defense is concerned about our shooter in the corner. 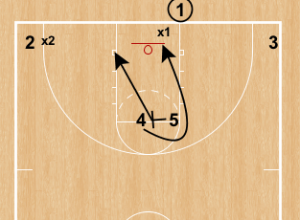 Rick Carlisle ran this play with the Dallas Mavericks to great success. This play works well because of multiple screens and misdirection. You can put your players into whatever positions you’d like. What is shown here is simply a suggestion. 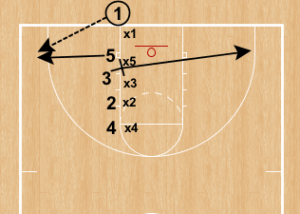 To start the play, we have our point guard inbounding, 5 is on the low end of the stack followed by your two guards and then a forward at the top of the stack. This is a lineup you can play with. Your best shooter, should be at the top of the stack. It doesn’t matter what position they play. Your weakest player should be the second in line. On the BREAK call, 3 sets a rub screen for 5 and clears to the opposite side. Many times x5 is in a bad position to fight this screen because they are protecting the rim. If your 5 man can shoot, they may very well be wide open here. One detail you cannot see on the diagram is that 2 should be facing 4. It throws the defense off for the next action.

2 fakes like he is going screen for 4 but really just clears to the wing as 4 dives to the rim. 4 is going to screen x1 and try to free up your point guard for an easy score inside. 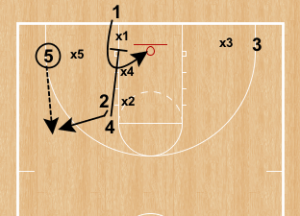 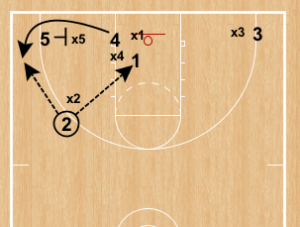 On the catch 2 should be looking inside first, to the inbounder who has entered the play off a screen from 4. If you have a good post player that you would prefer to be inbounder that works fine here too. But if you get this look, it is going to be wide open and it shouldn’t matter who is making the catch so long as they can finish at the rim. After 4 sets the down screen he curls off a flare screen from 5. His defender will almost always be trailing the screen and 5 actually ends up screening his own man sometimes simply to free up a corner 3.

We call this play three weak, because the look we want to get is a three from the weakside, but you can call it whatever you want. There are two layup looks for your big men, and there are two three point looks for your shooters. This is a good late clock play as well because whoever catches the inbounds pass is likely open to shoot.

Again, this set up is a suggestion, but in basic you want your best decision maker inbounding the ball and your best shooter on the block right in front of him.On the BREAK call, 4 screens for 3 and then gets a back screen from 2. We may get a layup here, but a good defensive team will often take that away. This is fine as it sets us up for an easy inbounds catch where we want it.If 3 is open and has range you may get a look here especially if the defense has overcrowded the paint to protect against a layup. 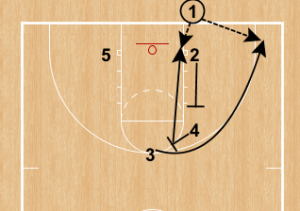 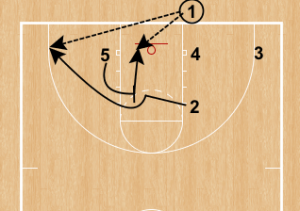 After 2 sets that back screen he cuts to the weakside getting a screen from 5. 5 dives to the rim after the screen. The look we want to get here is a wide open jump shot from 2. If that is taken away, 5 might be open if he cuts hard to the rim and seals his defender.

To see more out of bounds work from Brad Stevens and the Celtics:
https://www.youtube.com/watch?v=TMw4_iRQQD8

To see more out of bounds plays from Rick Carlisle and the Dallas Mavericks:
https://www.youtube.com/watch?v=ZqlUgDHaOX0

Out of bounds plays probably account for more of your possessions than you think. They are also the situation where you can put players in the exact place you want them so they are in position to score. So it only makes sense to put in a few sets that allow efficient shots for your best shooters and scorers.