Summary: The following three quick hitters can be used against a man to man defense. They begin out of a formation commonly called ‘Horns’ or ‘A-Set’. These plays work well in combination with each other because they start our very similar but end with different players getting open looks.

As a coach, these how much time you spend on these plays is totally up to you. The day before a game is a great time to review these plays in order to make sure that we are running them correctly. If you have scouted your opponent, you may have a good idea of which one of these plays to call more often than others. As with any set play, you must remind your players that if they see an opportunity to score, they must take it, no matter what the play call is. In practice, make sure to run plays in both directions so that players understand what happens if they are on the weak side of the play.

Coaches Quote: Bob Knight once said, “Two keys to being effective with the ball are the shot fake and the pass fake.” In this offense, your players in the 4 and 5 spots need to know how to use those effectively because they will open up opportunities for themselves and others.

We call this one Iverson because it features a cut made popular by Allen Iverson. If your players have not seen much of him, please show them. As good as he was at handling the ball, this simple cut freed him up to make many open shots in his prime. This play is designed to get your best player the ball with an advantage. It is a cut that any player can learn to master. In fact, you can set up simple 1 v. 1 competitions in practice with cones for screeners. This way your players can see that the first man to make a catch on the wing has a great chance to score and make a play.

An Iverson cut starts the play and the first player to catch always has the opportunity to rip through and drive to the rim or simply shoot if he’s left open. 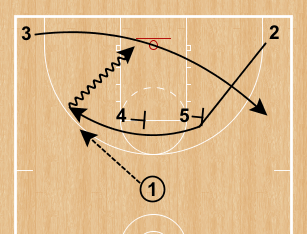 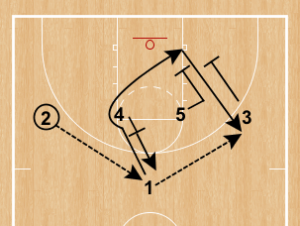 Option 2 is point guard cutting to the rim. Option 3 is the screener popping out for three.

Option 4 is a a high low pass to 5 if they have sealed into post position. Option 5 is a ball reversal to 1 through an elevator screen .If 1 makes this catch without a shot, he can get a step up screen from 3. 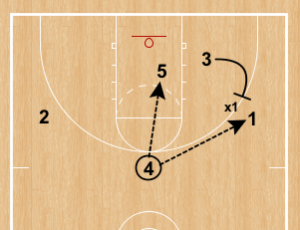 This particular play is called Spartan because Michigan State runs it quite a bit versus man to man defense. It starts out from the same set up as previous, but the options that build off of it, allow for more scoring from your big men. 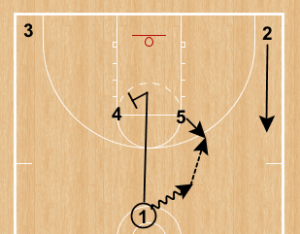 Your point guard can initiate this offense to either side to start the play. He follows his pass with a cut down the middle. We do leave him the option to keep this cut going to the rim only if his defender has completely fallen asleep. Normally he stops short and sets a back screen for the weakside big man.

The first time you run this you will most likely get a defense switching and the high low pass from 5 to 4 will be open. Because defenders are taught to protect the rim, they are usually in bad position to defend against a screen set by 1. If we cannot get the ball to 4, we can also get a layup from 2 on a backdoor cut. 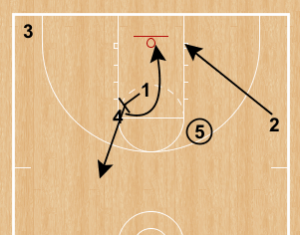 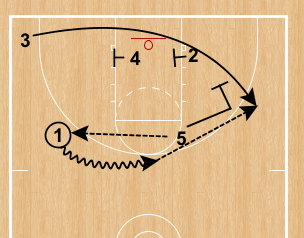 Those players wait on the low blocks and set a double stagger screen for the wing in the corner. Meanwhile 5 passes to 1 and sets a third screen for three to run through. Obviously if 3 is a good shooter, defenders will be stuck to him and curling to the rim becomes an option, as does fading to the corner or simply shooting a three from the wing.

Brad Stevens has used this set since he was at Butler and the Celtics run this with great success. Between dribble handoffs, backscreens and flex screens, the opportunity for easy baskets are plentiful.

Play starts with a dribble handoff between 1 and 4. If four can shoot a three he may do so here, but usually it is well defended unless you are running right into this set from a fast break situation. 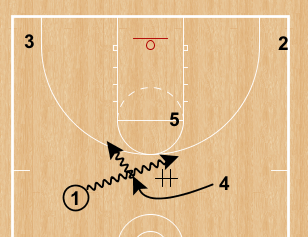 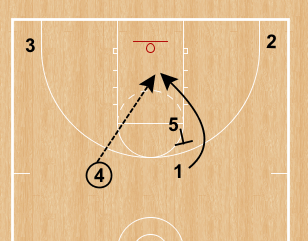 1 continues to curl off 5’s backscreen for a layup if possible. This might be there the first few times you run this play and then defenses will wise up to it and prevent the easy score.