Summary: The following three plays are designed for coaches at the youth basketball level. They are simple so younger players are able to understand them and get better at performing basic basketball movements. The focus of each is to get an open layup followed by an open jump shot.

Please keep set plays limited at a youth level. As a coach, you can give them very simple things to remember and run, but the most important thing for them to do as a younger player is see the game and start learning how to make great decisions within the flow of the game. These plays should only be called when you don’t have an advantage on offense and you want to create one, or maybe you have gone on a scoring drought and your young players need a tiny bit of structure to get an easy bucket.

Coaches Quote: While not exactly a coach, nor someone your young basketball players would know, the famous author Leo Tolstoy once said, “There can be no greatness where is not simplicity, goodness and truth.” In a basketball sense that means to keep the simple plays simple, stay positive as they are learning, and be honest with them about your expectations of them.

I like to name plays based on something that happens within it, so the image is in a player’s head when the play is called. Young players have a tough time remember a set, so anything helps. As with all three plays, this one starts in a five out set up.

Actions in this play are triggered when the ball hits a wing player. This can happen with a dribble or a pass as shown here. As soon as 5 makes the pass he is setting a screen away for 3. 4 Cuts hard to the rim as soon as 5 screens away. This creates confusion and our first look at a layup. Please note the angle and the area of the screen. The angle should be to the corner and the area should not be too deep in the corner. The screener wants to give the player getting the screen some room to use the screen effectively. 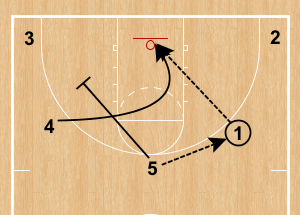 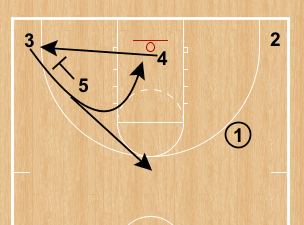 As soon as 4 cuts to the rim, 3 must be blasting out of the corner. 3 has the option to curl, if his man is trailing him or pop if his man ducks under the screen. Either way, if 2 and 3 are your better shooters and they start this play in the corner, you should get an easy look for them. Make sure the 4 man, or anyone who makes that first cut, doesn’t linger in the post. They need to clear out because their teammate will be showing up shortly. Break down drills for this are simple. Play 1 v. 1 with an all time screener and a coach as passer. Build to 2 v. 2 with a coach as passer, and finally go 3 v. 3 with a coach as passer and scoring can only be done from one side of the floor. Challenge players to create easy shots.

This third option only really works if you have kids who can shoot from three point range. This jump shot is almost concedd many times as defenses usually over react to the two previous cuts. 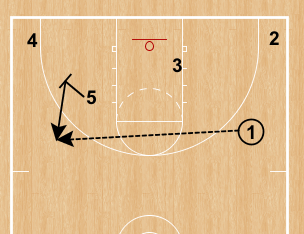 We call this play elbow, because if it works right a handoff will be made at the elbow area resulting in an easy layup. If we don’t get that easy layup from the first cutter, we usually get it from the second. 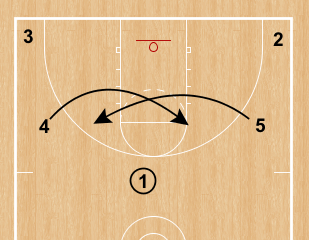 The two players at the wings run shallow cuts to the elbows. If you have one side you prefer to run this to, you can adjust this to be a screen to free up your preferred player. This exchange should free up one of your players for an elbow catch.

Action is triggered by a catch at the elbow. 1 cuts right towards the player he passed to. Immediately as this is happening, 2 clears out to take help defenders with him and 3 sprints to the top of the key. Many times, you will get a layup off the original handoff because help defense is in poor position 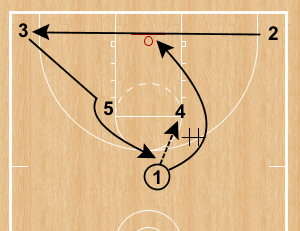 If 1 doesn’t get a touch on his way through, 3 may have an open jump shot at the top of the key, or he can follow and try second handoff. The only way a defender can choose correctly here is if the offensive player makes a bad choice to rim cut or pop.

This is a simple play that youth players can run and it is so effective that even teams at the NBA level, like the Warriors, run variations of this play. We call it pairs because two players will work together one side of the court to try and get an easy basket.

As with most of our plays, we start in a five out set up. Young players must constantly be reminded to go make plays where they see the chance. If they can get an easy bucket by simply reading the defense, then we do that. 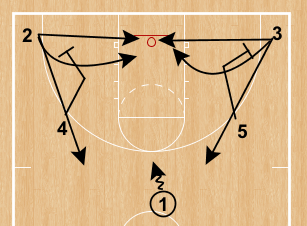 Action in this set is triggered when the ball hits the top of the key. Wing players set a pair of wide pin down screens for players in the corner. This creates a simple two man game that players should start to learn at a young age. The player getting the screen has multiple options based on the defense. The screener has multiple options to dive, fade or pop after the screen.

The worst thing you can do as a youth coach is overload a player with thinking about running too many set plays. They will get stressed, go slow and be less effective. Hand them any or all of these sets and only use them when you absolutely have to. If players only know how to run plays instead of make plays, their offense will be easily broken and they won’t develop skills they’ll need as they grow.