Summary: Some zone offenses are made to run against even front zones, and others work best against odd front zones. The following plays work well against any odd front zone. They utilize screening to free up space for shooters. Good shooting teams are zone busters, so the better you run these plays, the more likely an opponent is to give up their zone defensive tactics.

Your players must learn to understand how zone coverages react differently to cuts and screens than man to man coverages do. I would suggest introducing these in a ‘whole-part-whole’ format. 5 v. 0, Small sided games, then 5 v. 5. Younger players may not have the confidence to attack a zone, especially one with aggressive traps. Do anything you can to remind your players that we are welcoming that pressure because it creates an advantage for us if we can properly pass our way out of it.

Ball Handlers: Your point guard needs to walk a fine line between smart and aggressive. It is
their decision making that will likely make these plays succeed or not. He does not have to be a
great shooter, although obviously that is a plus. If they are unselfish and don’t mind setting
screens, well, that is useful too.
Shooters: One of the single biggest things you can do to help your teams performance against
zone defenses is to put your best shooters on the floor at the same time. Don’t worry about size
difference and matchups as much as you might against man to man. A good shooting team is
tough to defend with zone, so get your shooters out there and remind them of this constantly.
Big(s): Building off the last note about shooters, you will likely only have one true ‘big’ on the floor
during any of these three sets. As long as he knows that his primary function is to set great
screens to get layups, and also read screens well to get layups, then he should be effective. The
better the screen, the harder the roll, the more he will score, or create openings for his/her teammates.

Coaches Quote: Kansas Head Coach Bill Self said once, “The ball moves the zone, players do not.” Say this phrase over and over again until your entire team understands what it means. If the ball is moving, so is the zone. If the ball is being dribbled or held, the defense is moving slowly, or not at all. Keep it moving.

This play has been successful against my teams when we have used a 1-2-2 zone trap. It forces the defense to think and in essence slow themselves down because of misdirection and good spacing by the offense. In my opinion, not enough zone offenses use screens effectively, but those that do are hard to stop.

Our spacing is particularly important especially against a zone that traps the corners. We simply lift our guys out of the corners so the defense hesitates a bit to trap. Our 5 runs to the weak side block. Our 4 starts by splitting the top defender. Our 2 and 3 run to the same place each time. We run a numbered break and this offense flows nicely out of a numbered break.
1 starts the play with a pass to 4 and cuts like he wants the ball back for a layup, but we are NOT looking to throw that pass as it is rarely if ever wide open. Instead, 4 runs a dribble handoff towards 2.
The entire point of this action is to shift the defense to the right side of the court. The more aggressive the trapping action is, the better off we are because they are more likely to be loaded to the ball side 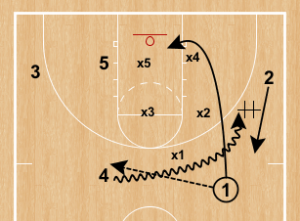 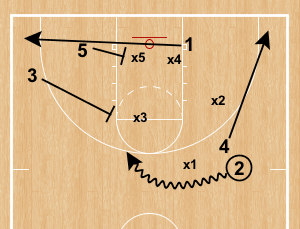 After the dribble handoff 4 clears to the corner for good spacing purposes and two dribbles hard to the left side of the floor. 3 pins x3 near the middle of he court and 5 pins x5 near the left block, which opens up the corner for a skip pass and a wide open three. If your point guard is a consistent shooter from the corner, this is a very difficult look to stop.
The skip pass is not an easy one to make though because most times x1 is coached to contain the ball on one side of the court. While this is a strange pass, it is a needed one, and you should practice this pass in practice through break down drills all the way up to 5 v. 5.

The initial set-up of this offense needs to be stressed. The corners need to be left open for what happens next. Wings should be raised so that they are directly in between the two levels of the defense to create some confusion. The 5 needs to be below the last line of defense, which is an awkward concept for a younger player to understand. They need to understand the importance of staying active and taking advantage if the defense loses sight of them. 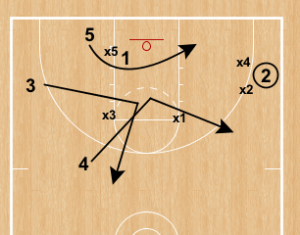 If you are playing against a trapping zone, this is the opportunity to use that aggressiveness to your advantage. When the ball gets passed to 2 he will likely get trapped by x4 and x2. 4 makes an L cut into and out of the high post. x1 is unlikely to chase him because most coaches will ask that he protect the high post catch and give up the perimeter catch. 3 gets the defenses attention with a flash to the middle and a cut to the top of the key. 1 sets a screen on x5. 5 cuts to the low block and should be open for a post catch.

If we cannot get this score, we MUST reverse the ball quickly to open up the same opportunity on the opposite side. The guards must understand that they are not just passers. If they can catch and shoot, we encourage them to. If they can get to the rim, the chances to do that on ball reversals will be there. 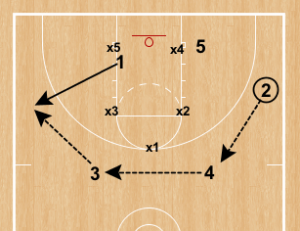 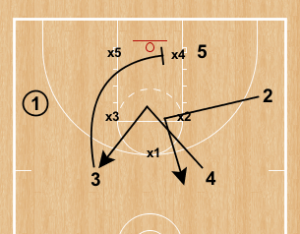 Once we reverse the ball, continuity action follows.

In this set that we call double, we are simply looking to set two ball screens at the same time to give our point guard a simple read that will either result in a three point shot for the weakside wing or a layup if he can beat his man off the dribble. The play starts with our point guard dribbling to the wing. His goal is to draw x2 out as a defender. This set does not work as well if a team traps wing areas, but many teams don’t. Typically x2 will step out to defend the ball and x1 will drop to protect the high post. 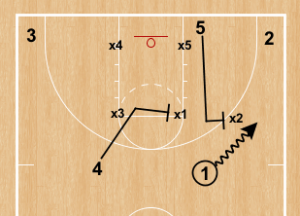 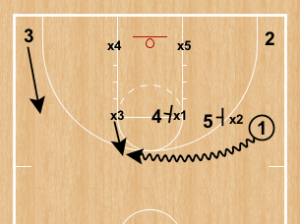 After the two screens are set, we want x3 to step up to try and contain the ball. If they do not then our point guard should turn the corner and attack the rim. If he steps out to defend our point guard, 3 simply raises from the corner for an easy kick out three.

If the ball ends up in 3’s hands and somehow we don’t get a shot off, we should be looking for 5 diving through the middle of the defense for an easy score. 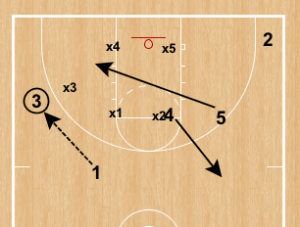 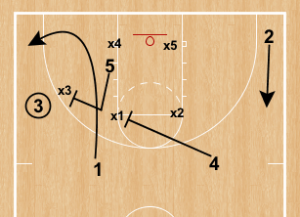 The worst case scenario is that we’ve set up the offense to run the same play from the opposite side.