Summary: With modern basketball shifting towards a positionless game, this offense provides multi-talented players the chance to operate in space and create easy shots for themselves or for teammates. This offense creates highly efficient shots and is tough to defend with typical man to man principles.

Why should you use this offense?

What are some challenges when implementing this offense?

This balanced offense requires players to be unselfish, so remember the following quote from Bill Russell:

Create unselfishness as the most important team attribute.

The numbers back it up…

This offense should yield plenty of catch and shoot chances. According to the NBA’s SportVu Player Tracking statistics, players have an effective field goal percentage of over 51% when they catch and shoot. That number drops to 40% off the dribble. If the most skilled players in the world drop off 11% on the dribble, you could assume players at your level drop off even more.

Basic Flow of the Offense:

We start this set in a five out formation. Players can be in any spot to start as all positions are interchangeable. Ideally though we like our best player/shooter to occupy the spot 2 is in below. He will be the first player to get a chance to score a layup and if we screen well will likely have an open jump shot on a weak side ball reversal. Play starts with a dribble at either wing. That wing makes a rim cut looking for a backdoor layup. We don’t score on this look often but if the defense is lazy you must take advantage. This is where you can take advantage of teams that play an aggressive man to man defense. Use it against them. Obviously this is a less likely option against more Packline style defenses. 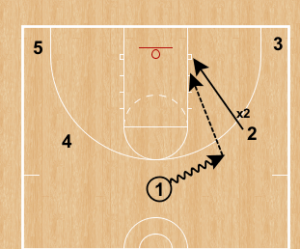 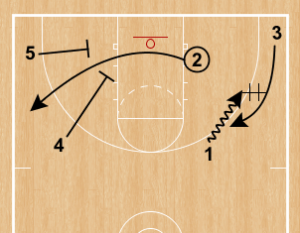 If we cannot score the backdoor layup, The point guard and the guard in the corner will run a dribble handoff. The more speed they can exchange the ball with, the better. We have already put the defense at a disadvantage if we do this. At this point 4 and 5 have already set up for an elevator screen for 2. Some teams like to run this with a staggered screen which certainly has its merits, but our team found better looks and set better screens when we went to this look.

If we have proper spacing 3 should be able to turn the corner and look to attack the rim. The weakside screening and movement should pull help defenders out of position. So the player getting the dribble handoff must turn the corner hard and be looking to score first. This goes for any player catching the ball after a screen or handoff. Your first thought needs to be: Can I score easily? 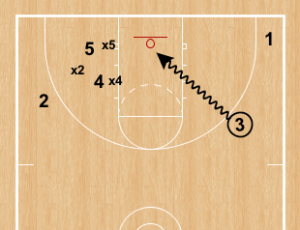 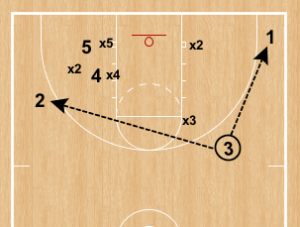 3 has several options if the drive is cut off. The most likely one is an open three from 2 who has come up through the elevator screen. Another look we often get is a corner three from 1 because the defense worked too hard to protect against the drive on the original dribble handoff. Making the right decision here leaves the defense in a tough position. You must stress to 1 though that if he catches, it must be into an open jump shot immediately. Holding the ball in this offense completely throws it off. There is no room for hesitation.

If 2 is a great shooter, you may get this option more often than not. If the defense over reacts to the elevator screen, 4 simply dives to the rim for a pass from 3. He’ll either be wide open or sometimes he will have a smaller defender on his back because of a switch in the defense. 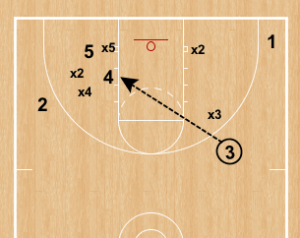 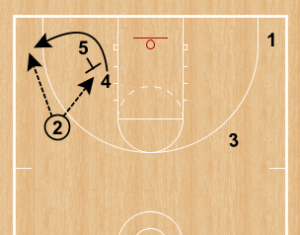 For the sake of demonstration, let’s say we get the ball to 2 and he cannot get a shot off, the lower of the two screeners sets a screen to free up his fellow screener to the corner. (4 and 5 shown here).
Again, don’t ignore the screener here. Often times, 5 can slip and dive to the rim for an easy catch and score. This usually happens if we have run through this offense a few times and the defense predicts we are just going to throw to the corner like robots.

Now we enter the continuity piece to the offense. Whether it is a dribble handoff, dribble pitch, or a straight ball screen, if the player in the corner cannot shoot an immediate open three, we run right into side ball screen action, with your last screener cutting away and your weak side players setting up an elevator screen again. It is imperative the ball not stay stuck in the corner or even stuck on one side of the court. The defense has already shifted right to left once. If you can get them to shift again, your shot will likely be an open one. Don’t let them rest by being stagnant. It is key to note here that your 5 man is making this cut and he very well may not be a great shooter. It is imperative that you either a) work on him improving his shooting range or b) express that he is catching and should be immediately looking to dribble handoff or ball screen to the guard in the corner. 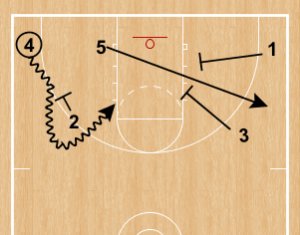 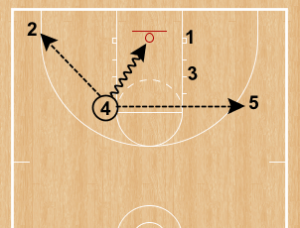 Here you see we have the same set up as the original offense with 4 having the option get to the rim, pitch to a corner, pass to 5 or find 3 on diving to the rim.

To learn more about elevator screens, take a look at this youtube video featuring several examples from the Golden State Warriors: https://www.youtube.com/watch?v=iUS4vUh4M6I