Summary: If you like your transition offense to flow seamlessly into your half court offense, this particular man to man continuity set might help. It can be run by teams with different skill sets and adjusted slightly from team to team. The simplicity of the offense gives players to freedom to attack and make plays.

Why use this offense?

What are some negatives?

Basic Flow of the Offense:

The quicker you can get your team into this offense the better because it is predicated on attacked a retreating defense and forcing mismatches through constant screening amongst your bigs.

If our point guard can pushes the ball up the floor their first look is to the corner for a three and their next look is to the post. It doesn’t matter which post player runs to the block. The first one down the floor runs to the low block, the next one runs to the top of the key.  Your guards should consistently run to the same corner every time to avoid confusion or bad spacing.

If we can’t get a quick three or a layup the point guard looks for a pass to the trailing post. If this player is left open for three, which they often are because defenses are recovering, we encourage this shot so long as it is within their range and they are in rhythm.

If they are covered, our point guard has his first read into a handoff. He can take the handoff and turn the corner to try and get to a layup. If he is overplayed, or the defense is trying to disrupt the handoff, he can simply take a couple of steps towards the big man and then backdoor cut. On the backdoor cut, the big on the low block MUST clear to the weak side. It is imperative that this part must not be rushed because it provides two great options for layups if we read it correctly. 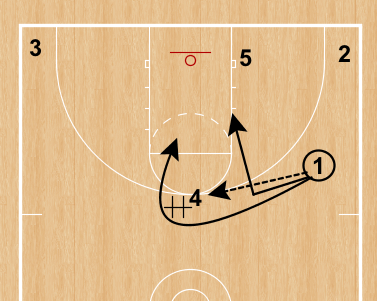 If the handoff is made, the 4 has no decision but to roll hard to the rim. 5 will step up and try to back screen for 4 so as to create mismatches. If the guard chooses correctly, we should either get a layup from our point guard, an easy score for a big rolling to the rim, or a kick out three to a big man. If help comes from one of the wing defenders, we simply kick out for an open three or to a guard who will run the same continuity screen the screener action again. 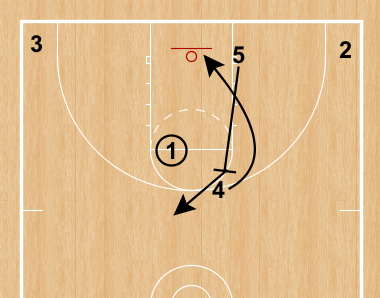 Let’s just say for instance we kick out to the big man who has set the back screen and the shot is not available. Then we are right into a continuity motion offense. On the catch, the big man can initiate the offense to either side, but we prefer to look to the weakside first to make the defense shift more. The point guard who initially penetrated fills to the corner as the weakside wing, usually the 3, steps towards the big man who has initiated a dribble handoff entry.

The 3 in this case has the same option that 1 did before, take the handoff and get to the rim. Fake it and back door cut. Either read should result in an open look. Many times defenses will not try to disrupt the handoff but they will switch on the screen to prevent the guard from turning the corner. You must make sure your guards turn the corner hard and attack the paint. Even if they don’t score or get fouled, they will likely draw the help defender from the opposite wing, and we often times get an open three here. 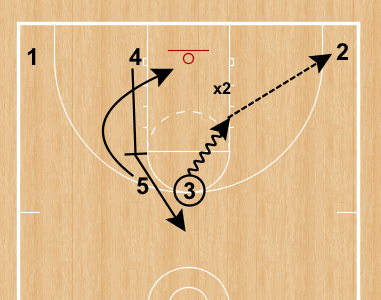 Shooting over the screener: If you are playing against a Packline defense, many will guards will go underneath the screen and force your guards to make jump shots to be effective. Make this a part of your practice shooting drills. Have them simply run out of each corner into a handoff where they plant themselves right behind the big after the handoff and use the space created to take an open shot. If you have a couple guards that can stop and pop behind the screen, this offense becomes very hard to guard.

Do you always have to set a back screen? No. It is not always necessary for the bigs to screen for each other, but they do have to exchange. The big man executing the handoff must roll, the other must raise to the top of the key, if the back screen happens, that a bonus for us because one of our big men will usually be open so long as our guards have good vision to see which opportunity is best.

What happens if the handoff and backdoor is defended? If you are playing against a good defensive team, they may disrupt the handoffs with their on the ball defenders and also disrupt basket cuts with help defense. In this case, the play almost runs like a loop, if the first guard through doesn’t touch it, the guard who just filled to the corner is right back into the action. 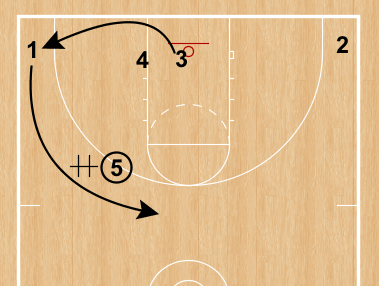 Can’t your guards just dribble into a ball screen? Yes, if the big man is overplayed and we have to dribble into a ball screen, we do so, but we prefer to throw a pass to them, run to them and make a read. We prefer this because all players move a little faster without the ball and we find our guards make better decisions about how to attack the handoff rather than the ball screen. This is an easy drill to set up in practice and it is something that should be repeated frequently so your guards get used to all the options they have to score.

The single best thing about this offense: The reason why this offense can eventually become effective for your team is because it teaches them how to work together to score rather than isolation ball, it also teaches them how to ‘think the game’ rather than just run plays. If you run this right, your opponent may never even realize the patterned offense you are running because your guards and bigs are consistently making the right decisions to get quick easy buckets.